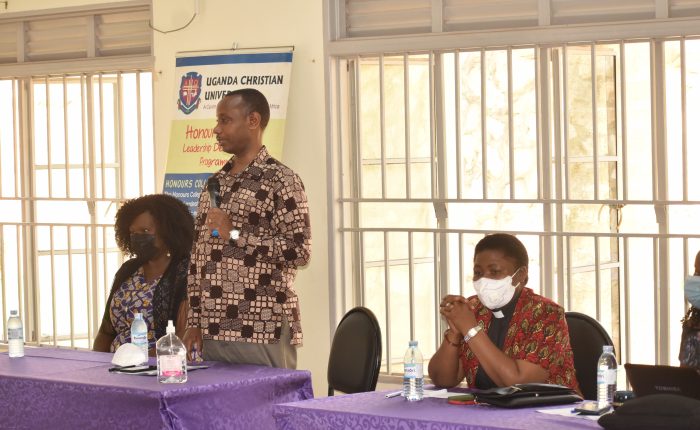 The Uganda Christian University Vice-Chancellor, Dr. Aaron Mshengyezi has promised
to offer support to honors college projects and activities. This happened on November 13, during the Honors College Graduation and Ministerial swearing-in at the ICMI block in which the VC was in attendance.
Before his speech, various members of the honors college presented projects that prompted the Vice-Chancellor to pledge his support.

In his speech, Vice-Chancellor Mushengyezi began by praising the project presentations that the different honors college students had come up with. Among these projects was the idea on environmental conservation through the reuse of plastics to create valuable items such as jewelry. The project was an initiative of
USANII village Africa in partnership with the 2021 Earth Connections Through Art Conference members. This was pioneered by the former college president, Juan Emmanuella and presented by Emmanuel Isabirye, of the honors college.

Another project presented during the event was one on the fight against sexual
violence against children.  In response to these projects, the vice Chancellor offered praise and a promise of
support to the innovators. He also focused his speech on condemning sexual violence against children and offered to help where he can to end the vice.
During the event, Vice-Chancellor Mushengyezi blessed all the honors college graduates. The incoming leadership cabinet was also sworn in on the same day. His departure was marked by a prayer for the scholars and taking of pictures with different groups of honors college to fully memorize the event.

The event later ended with a speech from Madam Pamela Tumwebaze who officiated
the ceremonial cutting of the cake. The honors college initiative remains in full anticipation of the positives resulting from the strengthened partnership with the UCU Vice Chancellor, Aaron Mushengyezi.

0Shares
PrevNext
We are using cookies to give you the best experience. You can find out more about which cookies we are using or switch them off in privacy settings.
AcceptPrivacy Settings